Barcelona in one of the most beautiful cities we have visited on this world cruise.  The city is busier than normal as this is Easter week and many are on holidays and there are five cruise ships in harbour.  Barcelona has one of the busiest cruise terminals in all of Europe and it comes as no surprise when you see the city.

The Cathedral in Barcelona was very busy as we visited during Holy Week.

The city is built around a central square which is the home of the cathedral and the palace.  One of the pictures shows the King’s doorway which leads from the palace directly into the cathedral.  The cathedral is stunning in its design and size and because we were on an official tour we got directly inside bypassing the long lines of tourists and the faithful waiting to get in.

Inside the 13th century Cathedral of the Holy Cross in the central square.

The impact of the Spanish artist/architect Antoni Gaudi can be seen everywhere but his most magnificent design is the Sagrada Familia (Sacred Family) Basilica (started in 1882) that is today, still unfinished.  While he was not the original architect, he took over and worked on it until he died.  Symbolism is everywhere and the attention to detail is hard to believe.  Gaudi had the intention that the church would be entirely funded by donations and that intention continues to this day.  The goal is to complete construction by 2026, 100 years after his death. Whether or not the church will ever be finished is discussed at long length in Barcelona and around the world. 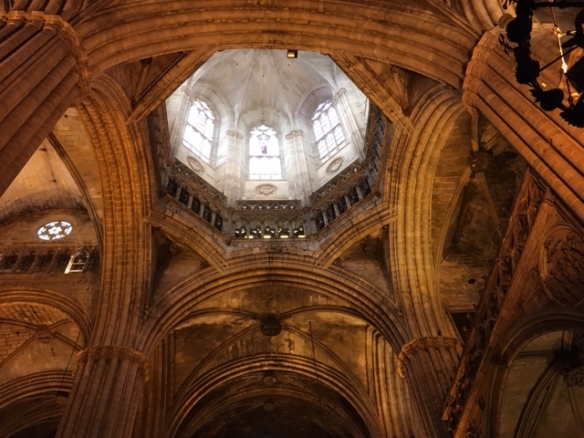 No flash photography was allowed inside the Cathedral so this was the result.

As the site of the 1992 summer Olympics, many of the facilities built for those games still exist on a mountain slope that overlooks the city. It is all very impressive.  However, the beauty of the city lies in the building designs and the small terraces or balconies that everyone seems to have downtown.  The central avenue, lined with apartments and condominiums overlooks a pedestrian walkway that is like no other.  While traffic travels one way on one side of the median and the other way on the opposite side, the median is two to three times as wide as the street and is given over to pedestrians and small shops, restaurants and bars.  Food is dispatched from restaurants on either side of the roads with waiters dodging the traffic to get to the patrons seated in tents on the median.  The central market is like no other and is a spoke off the main thoroughfare.

Snails of every description are sold in the central market. The products are like none you have ever seen and the price is right.

It is impossible to see or experience anything more than a glimpse of this city.  It goes on the list of cities that need to be revisited at a later date.  More pictures of Barcelona on the next post.