Teak ceilings in the mosque are ornately carved. 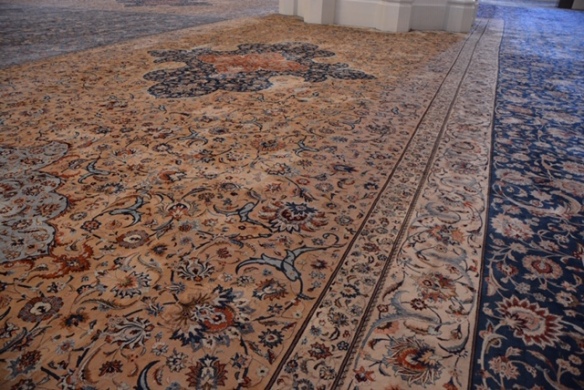 The carpet was made by 600 women weaving together. The carpet covers the entire mosque praying area without any seams.

The tiles are on all four sides of the mosque and perfectly arranged. 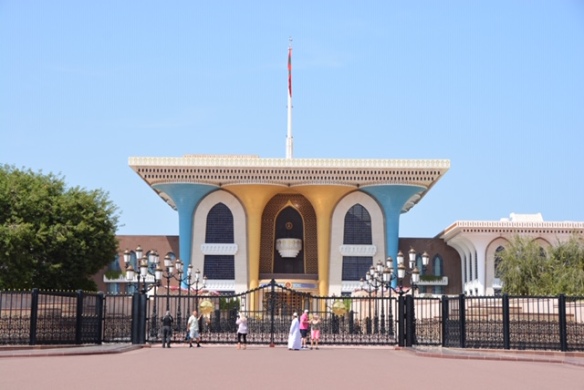 The entrance to one of six royal palaces of the Sultan. 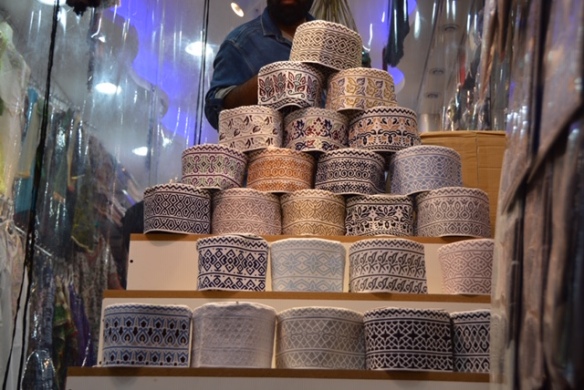 Omanian hats for sale in the souk (market). 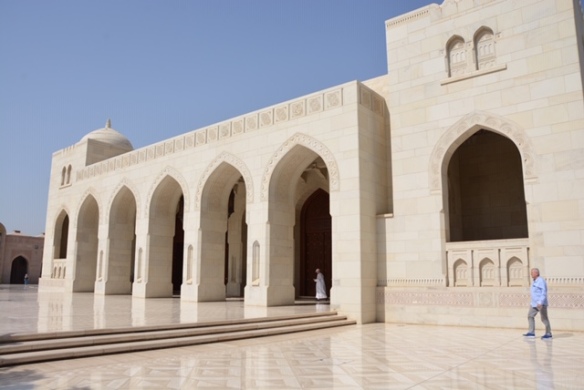 Women must pray in a separate building with no men present. It is, however, just as spectacular.

Ever since we left India we have been travelling in what has been identified as “high risk” seas. In the last ten years there have been a number of attacks on ships from pirates out of Somalia. From a high of more than 200 attacks annually to last year when there were only a handful, ships need to take additional precautions when transiting this region. The Amsterdam is no exception.

Our current location on Sunday morning, Apri 7.
Speed and heading is shown in the top left corner.

We are now travelling between Somalia and Yemen. The ship has now been rigged with high pressure water hoses every 20-30 feet along the third floor promenade. The hoses are charged and ready to go. Crew assigned to the hoses lie on their stomachs and direct the water spray along the sides of the ship in order to sweep any potential pirate back into the sea. In addition to the high pressure hoses, a series of high intensity sound generators have now appeared on the upper levels. The highly directional sound generators also act to repel any approaching pirates. Additional security with night visions goggles are patrolling the decks around the clock. Guests are asked to keep all outside windows covered from sundown to sun up and any outside lights are covered including the curtains in the dining room and in the lido (casual dining).

While the risk is considered low the captain is taking all precautions. He noted in a letter to all passengers that while unseen by passengers, we were being shadowed by naval ships from coalition countries. He also added that the best deterrent we had was our speed and therefore through the risk area we would be travelling at our maximum speed of about 25 knots. In a drill for all passengers and crew we had to come out of our cabins, sit on the floor away from any windows while the crew manned the high pressure hoses. Sitting on the floor is necessary as passengers might be toppled if the ship had to make any evasive moves at such a high speed.

We come out of the high risk areas midway up the Red Sea. The greeting on the ship for these days has been……Seen any pirates?