No matter where you go in Singapore everything appears perfect.  If there was a negative it had to be the extreme heat and humidity which according to everyone, never lets up.

Singapore is an island without any natural resources (no fresh water either), and has only been a country since 1965.  An amazing amount has been done since that time to turn the country into an economic powerhouse—and it shows.  The transit system, for example is high speed, goes everywhere and is totally automated, cheap to use, on time and spotless in all aspects. 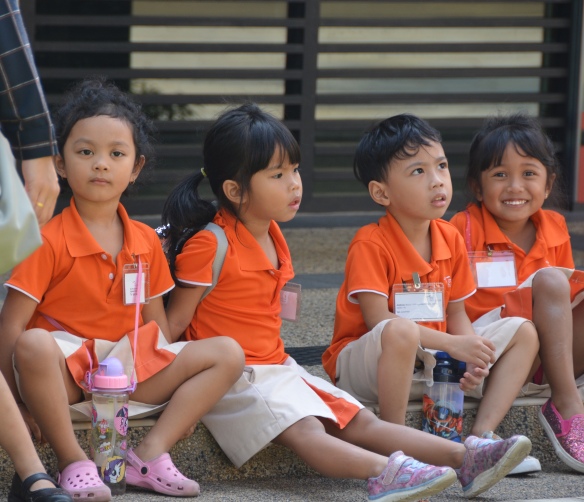 The harbour, the business district, and the shopping centres are something to behold.  The city is also a total mix of Chinese, Indian, Malay and those of us called “other”.  The city is in constant motion and the sheer number of shopping malls and blue ribbon companies is mind boggling.  As there is no empty space on the island, construction is either down below ground or high as in skyscrapers.  The Marina Bay Hotel seen in one of the pics has got to be one of the world’s most amazing hotels.  Some of the ship’s passengers elected to spend a night there to experience the setting and to swim in the pool that graces the roof and its 360 degree view.  Because there is very little open space, gardens and greenery are frequently planted and found growing on rooftops and in pods on various, higher levels of buildings.  It makes for a very attractive city.

In Singapore we visited the Sultan Mosque, located in the centre of Little India where we learned the 5 pillars of Islam.  Once again we heard the electronic “call to prayer” and witnessed first hand the importance of the mosque in the centre of town.  Unknown to me was also the significance of the Singapore River which winds through the island.  We had an opportunity to take a river boat cruise and seem many of the original market homes that line the river and now sell for millions of dollars and rent for almost the same price. The realistic sculpture below, affixed to the side of the Singapore river,  depicts five youngsters jumping into the river—a scene we have all seen at our local harbour.

After the negative reviews of some of our past island experiences in Java, Singapore was a welcome relief and another location where we ran out of time for our explorations.  As we head out we are now part of an armada of ships of all sizes and shapes making their way along the most crowded waterway (Straights

of Malacca) in the world.

By tonight we will be in the Indian Ocean as we head to Sri Lanka.

2 thoughts on “Everything seems perfect in Singapore!”