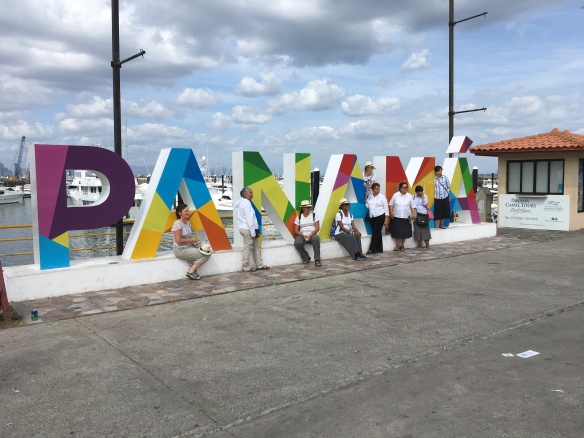 The transit of the Panama Canal is really something to see and experience.  We entered the canal from the Atlantic side and approximately 12 hours later were entering the Pacific Ocean at Panama City or more correctly Balboa.  The canal is busy with freighters and cruise ships going in both directions and without a lot of clearance. In the locks we had less than 30 inches of space on either side of the lock wall.  Four locomotives pull each boat through the locks yet it is still two men in a rowboat that come out to meet the ship, attach the tow rope and row it to waiting staff on the lock wall edge.

The target you see in the attached photo is a real piece of trivia.  Annually dock hands along the canal compete in a contest to determine who is the best line thrower of all the canal staff.  The winner each year has his salary increased by 100%.  The target you see is to determine accuracy in throwing the line to tie up the ship and the high bar represents the height of most ships going through the lock. Accuracy is one measure and strength to get the heavy lines up to the deck of the ship is another.  Each lock has a practice area and a range.

Another surprise was the high end nature of Panama City.  The skyline is full of skyscrapers and the harbour filled with beautiful yachts.  We anchored out in Panama City and took a tender into the city.  There we found the largest mall in the world!

Tonight (Tuesday) we cross the equator as we head south to Peru.  In contrast to the first week, the Pacific is relatively calm and smooth sailing.

6 thoughts on “Panama and the Panama Canal”